Which Country and Continent Have the Highest Number of Global Elite CS:GO players? 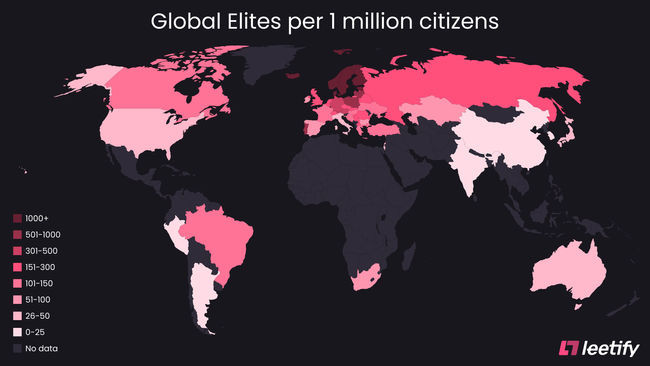 Since it entered the gaming scene by storm in 2012, the Counter Strike franchise has continued to cement its place as one of the top games to have ever been made. Its popularity is through the roof and it’s doing some pretty impressive numbers.

Global Elite Counter Strike: Global offensive has penetrated every continent on the globe. Given its global popularity, one can't help but wonder what country and what continent are leading with regards to population of CS: GO players.

Leetify, a renowned statistics website, has conducted a comprehensive study on which country and continent boast the highest number of CS: GO fans. The Leetify research findings are presented based on the number of gamers for every one million people in a country. The research puts Europe as the leading continent for the largest number of Global Elite CS: GO players in the world.

Over the years, Europe has been prominent the CS: GO gaming community. It has produced the top winners, the top earners, and lots of record breakers.

The top 4 countries from Europe also happen to be the top 4 in the world. Finland occupies the envious top spot with 3362 players for every one million people. Estonia comes second place with 2046 and Denmark takes the 3rd spot with 1867. Following closely in fourth place is Iceland with 1338.

Even though the Danes have enjoyed some dominance through the rise of team Astralis and an intimidating share of elite players in the last decade, they seem to be a bit behind when it comes to the population of Global Elite CS: GO gamers. Estonia, with a population that is 4 times less than those of the Fins and the Danes poses more impressive numbers.

Other countries that made it to the top 30 include the U.K with 159 players per million, Turkey 130, Canada and Bosnia with 113 each.

In the Americas, North America takes the lead in player density largely represented by the U.S.A even though its 101-150 players per million is way below expectations for a country with about 330 million people. Brazil dominates the south American continent with 101-150 players, accounting for over half of the continent's statistics.

Brazil dominates the south American continent with 101-150 players, accounting for over half of the continent's statistics.

Australia has a player per million range of 101-150. Asia follows with a very low range of 0-25 spread across the continent and Africa comes after with the lowest. South Africa is the only country with any data on Global Elite CS: GO in the whole continent.

Players around the world are beginning to embrace legitimate rank boosting as a means to move up the ladder in the game.

Have you been battling with a certain CS: GO level for a long time without success? That's because you either haven't heard of or used a rank boost service. Rank boosters are focused on relieving you of the hassles of climbing up the ladder of CS: GO.

For instance, BoostCSGO has a team of verified and elite CS: GO players who will take over the challenge and deliver a new rank to you.

BoostCSGO can produce an advancement of between 1-3 ranks per day. All you have to do is choose a package, make the related payment and rise through the ranks. No bots, no cheats. 100% legitimacy and round-the-clock support are what you’ll get to enjoy.

More statistics can be found: